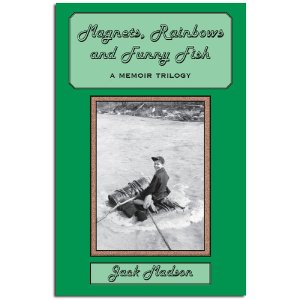 Magnets are mysterious. So mysterious that no one can explain how they do what they do. As such, they embody and symbolize the core of my spiritual life, the essence of my paradigm. The non-duality spoken of in Buddhism and Hinduism is best expressed in the magnet, which has a north pole and a south pole that are not two separate things but a single entity. Cut the magnet in half and you have two complete magnets, each with a north and South Pole. It's not a difficult step, then, to see life and death as a single process, not two separate things. Likewise, Good and Evil, sound and silence.

Rainbows are a natural phenomenon of nature, bringing together three seemingly disparate components: a source of light, droplets of water in the air and an observer. Eliminate any one of the three and the rainbow disappears. What is most fascinating and inspiring is that the colors are not out there, or up there, or even over there. The various vibrations of light are interpreted as color, in our brain, in our consciousness, the most awe-inspiring phenomenon of all.

Funny Fish is my generic term for all of the weird, oddball flips of nature that delight me no end, like fish that fly through the air and birds that fly backwards and all sorts of bugs that glow in the dark, and flowers that bloom at night.